In May 2009 I grabbed the chance to sea kayak across the Irish Sea from Holyhead to Dublin. It was a fantastic experience and I wrote a brief article about the crossing for the Canoe Wales magazine, ‘Ceufad’. Here it is, along with the very few photos that came back from the day.

It’s hard to sea kayak the waters of Anglesey without occasionally gazing west towards the Irish coastline, hidden over the horizon. At 50-plus miles, the Irish Sea crossing is an excellent challenge for paddlers seeking the experience of open water and commitment. I got my first taste in 1998 when, with Dave Naylor, we took a Valley Aleut 2 from Porth Dafarch to Dun Laoghaire. Our light-wind, perfect-visibility trip was enlivened only by Dave’s bout of seasickness ten miles off Dublin Bay, as his pasta-based energy meal proved livelier than expected. I never imagined that I would again be tempted by the monotony of that particular crossing.

My attitude changed a few years ago when Barry Shaw and Harry Whelan, abandoning the cautious approach so favoured in the past, set off from Trearddur Bay in a strong easterly, surfing their NDK Explorers downwind to Dublin in 14½ hours. Barry was also seasick during their crossing and I realised that this was possibly the only common experience that our respective trips shared. I was impressed with their achievement and envious of the adventure – I also wanted a piece of that kind of commitment. 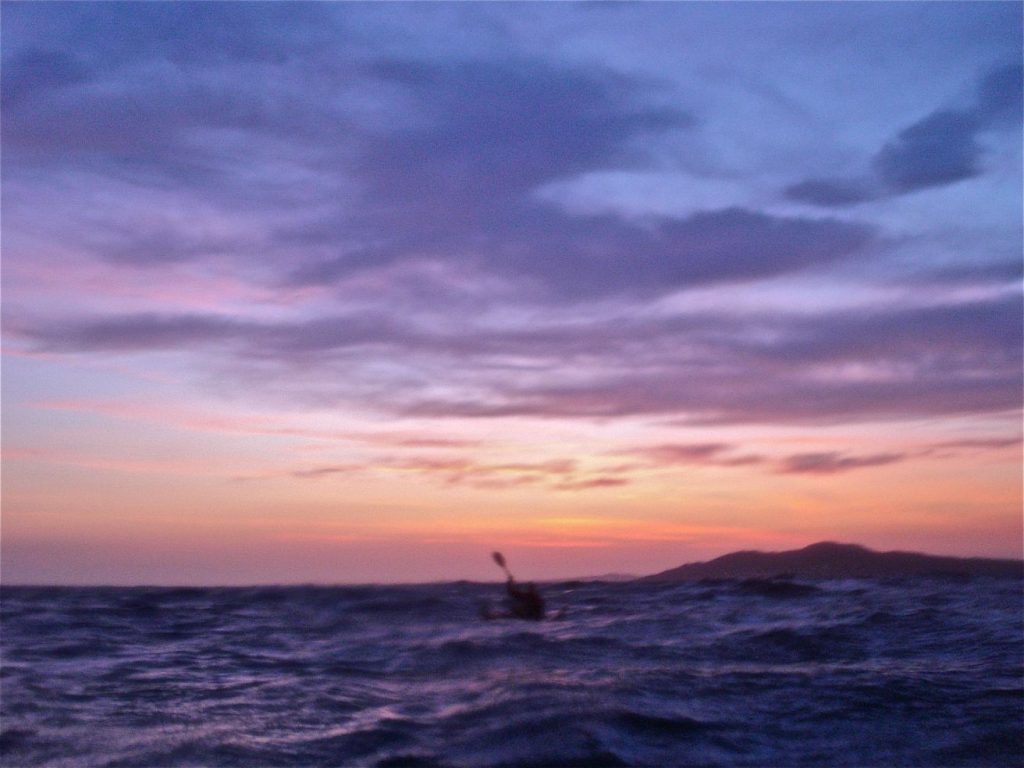 And so, May 2009 brought a spell of easterly winds and a window of opportunity. With a few work-free days looming, I couldn’t get the thought of the crossing out my head. I considered paddling alone but on the eve of the trip, uncertain of my form and fitness, I visited Barry and Justine Curgenven to discuss my plans. Sensing the hesitation, Justine called my bluff with a cheerful, “Well if you decide to go, I’ll come with you!”

A few hours of kit preparation and restless sleep later, we paddled out of Soldier’s Point under Holyhead breakwater at 4.10am. A stiff easterly breeze blew us down to North Stack, through the tide race and west towards Ireland as the first glimmer of light began to appear behind us. By the time the sun touched the horizon, we were surfing waves that grew steadily in size as we abandoned the lee of the Welsh coastline. Three hours into the trip, we were delighted to see our GPS ground track showing a distance of 18nm from our departure point. Holyhead Mountain, occasionally appearing behind wave crests, looked small and distant over my right shoulder. No turning back now! The Nordkapp LV was surging down the face of every wave, thankfully keeping me in touch with Justine’s seemingly rocket-powered Explorer. Barry had warned me of her speedy downwind skills and I began to realise that the major challenge of the day was simply to keep up!

An hour or so later, at around 8.30am, we passed through LW slack and looked forward to six hours of north-going tide. Our course, a few degrees north of west, was roughly calculated to balance the effects of the opposing tidal streams, so simplifying the navigation and reducing the overall distance paddled. We were well south of the ferry tracks and had seen only one vessel cross our course. As the day wore on, we turned a little further north to shape a higher course for Dublin Bay. Save for the occasional gannet, fulmar and shearwater, we seemed entirely alone. 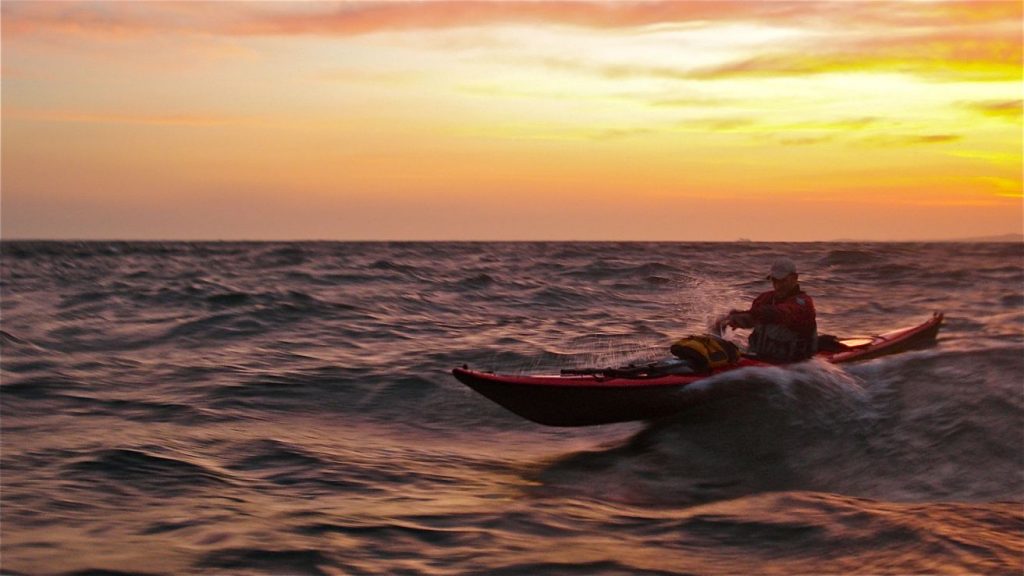 Ten hours into the trip the Wicklow hills loomed large on the horizon. Crossing the Kish Bank as the last of the flooding tide lifted us north, we continued to work hard in an attempt to close the Irish coastline before the ebb kicked in. The wind was now only force four and the reduced sea state, combined with our fatigue, made it harder to surf waves. The GPS, however, was indicating a ground speed of 4.5kts, a morale-boosting reminder of our progress. Although the trip had gone smoothly, the conditions had provided a few added challenges. It was rarely possible to paddle close enough to chat, rafting up required caution and a five-minute break was all it took to feel the first effects of wind chill. Worst of all, my early attempt at a pee stop, experimenting with Barry’s favoured “squeeze-release” technique, produced mixed results as a wave landed more water inside the cockpit than I could ever have achieved by other means. 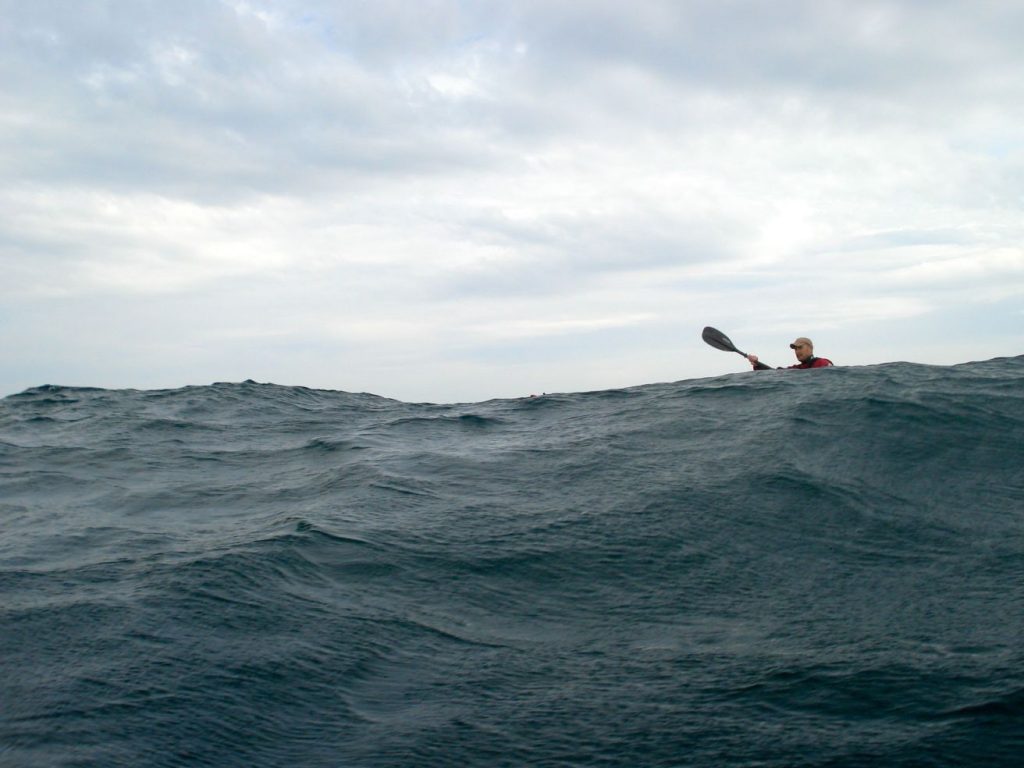 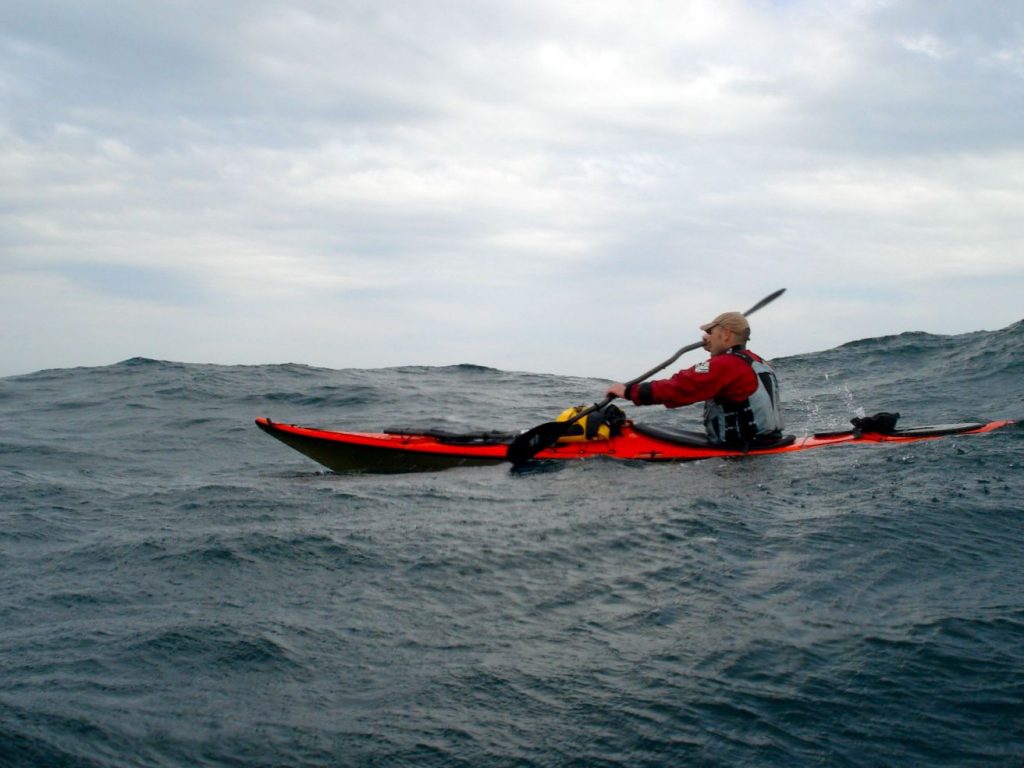 Still, the Irish coastline was growing clearer and we dug deep knowing our discomfort would soon be at an end. Also, early in the trip we had realised that the following sea was giving us an impressive speed. Mid-crossing, we had calculated that a sub-12 hour crossing was on the cards and agreed to keep up the tempo. Now it seemed our efforts were about to pay off. As Dalkey Sound drew closer, we began to experience the first of the ebb tide, but a short ferry glide behind the island and we were officially “inside” Dublin Bay. Within minutes of a perfect arrival time; now how’s that for planning! A few hundred metres later, a steep stone jetty partially protected by a low sea wall offered a landing. On wobbly legs, I slithered around ankle-deep on a weed-covered slab while Justine surfed ashore and hopped gracefully out. We hugged each other and checked the time: 3.55pm, 11 hours and 45 minutes after leaving the beach at Soldier’s Point. The GPS showed a distance of just under 56 nautical miles. 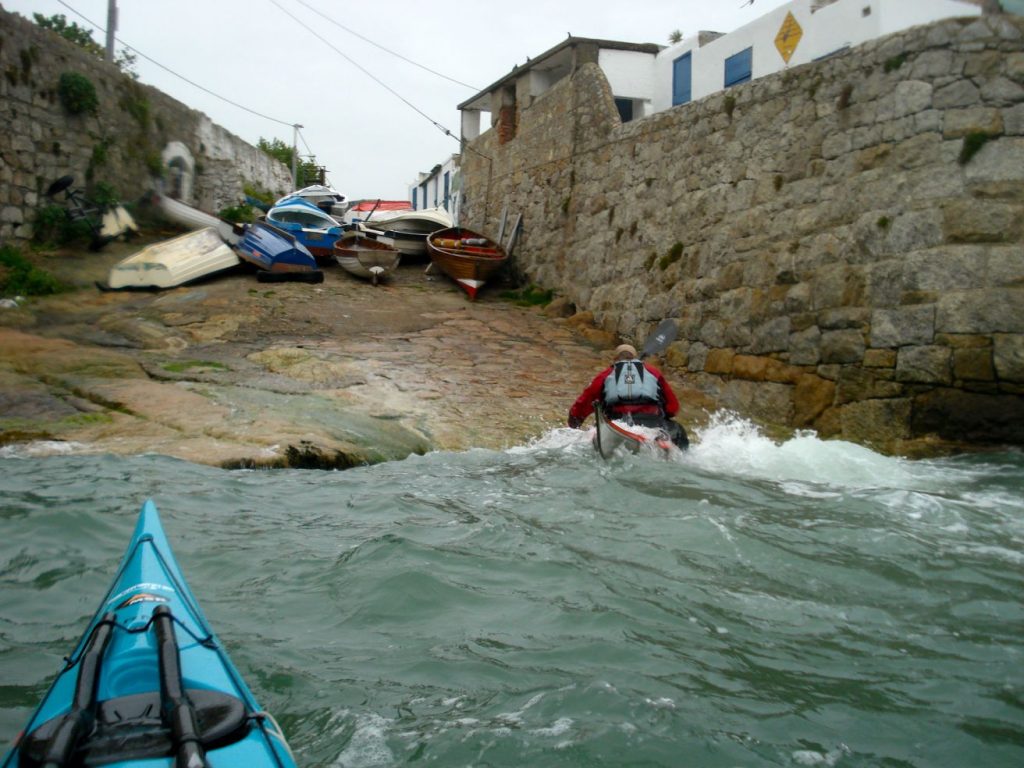 Before setting off we had figured that 14 hours was a decent target for a fast crossing; it’s tough to do better than that in a double or a racing sea kayak in flat conditions and we were uncertain what impact the following sea would have over such a long distance. I had suspected that tiredness would eventually negate any assistance from the conditions, but proved myself wrong. We were delighted with our time, clearly a result of grabbing any surfable waves that came our way. We hadn’t heard of a sub-12 hour crossing before and although we didn’t set off with that in mind, it was exciting to hit the beach well under the time limit.

Within five minutes of our arrival, Justine’s friends Des and Sonja arrived at Coliemore Harbour to take care of us, having tracked our progress online via some electronic wizardry hidden in Justine’s deckbag. With great efficiency they loaded our kit and drove us to their home in Dun Laoghaire. Mugs of scalding tea, warm dry clothes and a comfy sofa were a welcome contrast from the hard work of the day as we lounged around in a haze of tiredness and contentment. Justine seemed remarkably unaffected by her efforts, while my soft office hands had shed most of their skin somewhere en route and my right wrist creaked alarmingly. Still, it felt a small price to pay for my long-anticipated adventure and I had just enough finger strength to grip a few celebratory pints of Guinness in Des’s local later that evening.

Will I ever do it again? No chance – unless, of course, Harry and Barry go across in a westerly gale… 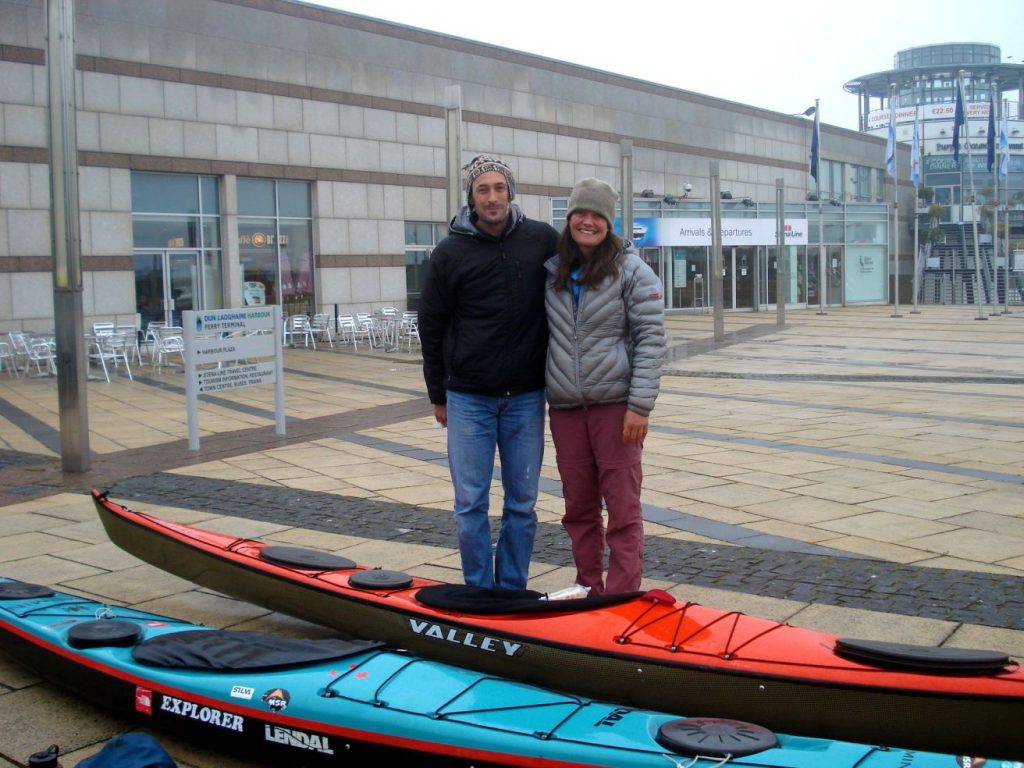 Many thanks to:
Des and Sonja – for their fantastic hospitality in Dun Laoghaire.

Stena Line – who provided complimentary travel back to Holyhead for two tired paddlers and their equipment.

Justine’s list of sponsors would require another article! For more about her kayaking adventures, check out the blog on her Cackle TV website: www.cackletv.com

Note:
Since 2009 there have been several other crossings of the Irish Sea via this route – notably, a solo crossing by John Willacy in 2011 in 11hrs 19mins. The following summer, in July 2012, Brian Fanning and Mick O’Meara paddled from Ireland to Anglesey in 10hrs 22mins, the current fastest time. These and other details can be found at John’s Performance Sea Kayak website.